Christopher Dresser (1834-1904). Dresser was one of the most talented designers of the 19th Century who created ornaments for a wide range of domestic objects. He grasped knowledge of the materials he worked with and the processes of production not seen with any of his contemporaries during this time period. Christopher Dresser created designs and forms for a wide range of materials including silver-plate, cast iron, furniture, ceramics, glass, textiles, carpets and wallpaper. Products designed by Christopher Dresser included kettles, tea pots, tea caddies, decanters, wardrobes and bowl to name but a few.

Christopher Dresser was a major figure in British Industrial history. His innovative design most known by his now world famous Tea Pot made by James Dixon & Sons which is recognised for its beautiful shape and industrial stark form.

Christopher Dresser was highly influenced by Japanese design and culture having spent time in Japan in 1876.His Japanese influences can be seen in the ebonised finish in several of his works including the well know Dresser Tea Pot.

I love how Richard Dormant writes for the Telegraph:

We see a copper kettle designed by Dresser in 1885. We look at this object just as we did the botanical diagrams, instinctively breaking it down into separate components comprised of a perfect sphere (the body) a perfect circle (the lid) an arched wooden handle that subtlety echoes the curve of the vessel, and the contrasting straight lines of the spout and feet. 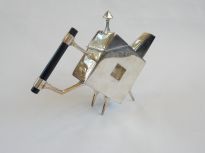 The Merits of Buying Vintage

The History of the Chatelaine

Tis in my Memory Locked

Why the Brooch is this Years Hottest Trend

Trinket Boxes for the Collector

A Gift For Someone Who Has Everything

The Story of Vintage Costume Jewellery

The Cigarette Case in Popular Culture

"Flappers in Fashion" by Ilianthe Kalloniatis